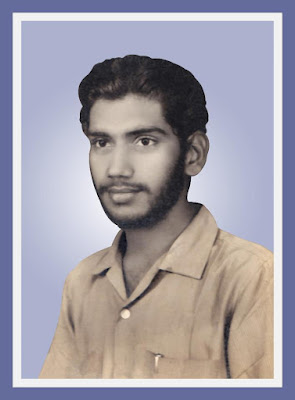 Aacharya is a disciple of Yoga Guru Pathanjali Maharishi, learnt and practiced Guruji’s leasons of Yoga through slogams obtained from ancients books wrote by Maharishi and have preached to his disciples for the past 30 years in Madurai district of Tamilnadu State.

At his younger age of 7 years, Master TS Krishnan’s (77years old as on date) Guru was his father, grooming him as a divine personality by teaching and making realize the secrets of ASHTANGA YOGA,
he was an eye opener to his spiritual world. His father Mr.Subramaniam was a Siddha Doctor from Thuvarankurichi, a small village at Trichy district. When his son completed his Gurukul period, father made his son’s mind very clear not to sell the art of yoga but to make people realize the yogic incarnation (God within-eternal happiness) in every personality.

Aacharya was married to Ms. Parijatham, a perfect better half of his life, the pair was blessed with 2boys & 3girls. Being a technically qualified person, worked with TVS at his early stages of career, started his own company at later stages before his retirement and served all his family duties & responsibilities as required.
At a busy schedule in carrying out his day today duties both for family & official life, he performed meditation besides the heavy noisy machines operated by him. Lead his life with principles and followed Maharishi’s way of yogic pattern of survival.
He also took a social responsibility of functioning an ancient temple called Sri Kasi Visalakshi Sametha Sri Kasi Vishwanathar temple @ Pazhanganatham, Madurai were our Guru Sri Pathanjali Maharishi is found in statue format.
He use to perform rituals to the rishi on him birth star day Moolam & at full moon day every month. At present the complete administration of the temple is taken care by his wife Matha Parijatham, her dedication towards Kashi Vishwanather’s Kayinkarya has no words to explain, even at this vayothiga(elderly age 75) stage her samarpana(surrenders) towards duty is a role model to never ending workwoman ship.

This service is done through his principle disciple Kamalakannan Ji who is the pioneer student to all who have learnt from him, lived with him for more than a decade, followed by Udayakumar Ji, Venkatraman Ji, Shrimathi Yasodha Ji , ramesh (me) and few others.

When Aacharya himself is blessed with such wonderful personalities around him blessed by god, then imagine about his qualities & incarnation to the world of his lifestyle between humanity, spirituality & work hauling life.
Aacharya has preached our pathanjali yoga to quite a lot of people at southern India. Neither he accepts compliments nor prayed for money upon his classes & teachings till date. As of now sath sang has published two text books upon yoga in a simplified format namely

1. YOGAM + AASANAM
2. YOGA DEEPAM in vernacular TAMIL, for which he has charged no price for the common public to read & get benefitted out it.

The moment he came to know that one of his book is found in an old book shop, he realized that people’s interest towards yoga is drowning in the sea of chase behind money at present generation, as these books were issued to people of spiritual circle. However made his mind to function in the Pathanjali Yogam way beyond such circumstances as per laws & darma of this YUGA (Kali).

For the past three decades Swartham Sath Sang have widely reached YOGA to common people at their door steps, public places/stages and at schools/colleges according to available space. At this point of time Sath Sang is planning to establish a YOGA PRATICE CENTRE in the name of Pathanjali Maharishi in a Shiva temple called Sri Azhavai Azhagan Nambi situated in Aritapatti village of Melur Town in Madurai district.

By which ways we make an attempt to inculcate practice of YOGA to villager’s in & around Madurai city for farmers, downtrodden people, young & grand generations, students and common public according to their age and health conditions, free of cost.

We see our Aacharya Krishnan Ji as our Guru Pathanjali, though his disciples being scattered across the nation, we live with the feeling of GURUJI LIVING WITH US at our place.

We the disciples of Aacharya @ Sath Sang would definitely make his dreams come true and make him live even beyond his life time in the form of his lessons.