Om is the name of God & God is OM. There is always a connection between a sound & an object. Therefore, God is there as an object for OM. 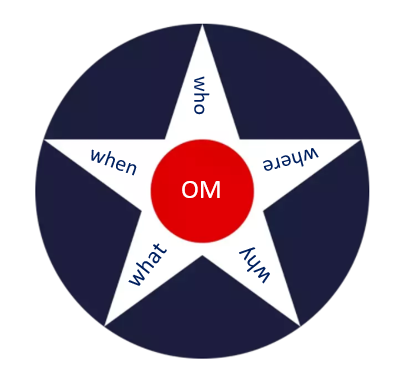 For example, we educate an infant the word mother (Ma) by means of introducing Ma & telling the child about mother & make her the foremost of all others. When the baby calls/cries as Maaaa…an object called mother is revealed, immediate mother approaches the child at its service.

Also, while hearing the word mother, there is an enriched kindness reveal from mother & it exists as a type of feeling. She likes the word mother(Ma). We keep different type of relation’s object in sound. Likewise, when we pronounce the word OM, God likes us & realises that he calls me, feeling pleasant, wishes to bless him. Because Om exists as the name of God. A word, its sound, its object & the feeling in it exists like this. Like the mother feeling happy when she is called as Ma, God is happy when he is called as OM. Only humans can produce different kind of sounds. Sound comes from wave/movement and movement/wave from sound.

Daily one has to practice ஒரு நாழிகை (oru naligai) i.e., 24 minutes or initially at least 15 minutes meditation upon the pranava sound OM probably during early morning hours (before sunrise to acquire the cosmos waves and to get connected to divineness quickly), then only he can be benefit out of such minute penance and understand what OM is all about.

In our body this om is existing in form of Mm(ம்) sound at one of our Source/Chakra’s ஆதாரம் (Aadharam) called Anagatham அனாகதம் (Anahata) located at our chest between lungs region, which continuously pronounces this sound Mn(ம்).

(Om Gum Ganapathaye Namaha !) When pronounced like this it changes as the name of Lord Ganesha. When a God’s mantra is pronounced, its God is revealed out of that.

That God’s image comes. This is not an imagination but a realisation, we add few ornaments to that image bliss with flowers, that power comes to one who is practicing it, when it comes like that by concentrating further on that image, it completely spreads and inundates within him (body & soul).

Sama Vedha has all its mantra beginning with OM and starts from the sound Mm(ம்). Om the pranava mantra is pronounced as the divine sound/tone in it.

Om is always a new sound, it has the inherent nature of creation, hence Om is known to be new forever, pranava is new forever, so pranava is a divine object/subject. Siddhas & Yogis know the meaning of sound OM, understood the sound mixture in it.

Which sound to mix in how much rate results in what! A rate in the sound Ah(அ), a rate in Uoh(உ), a rate in Ma(ம) when researched on this mix, they realised the existence of a great power for it. Om being a creating power, with that power these yogis viewed an image in it and realised that such an image is the image of God almighty.

Our spiritual life is based on the Pranavam i.e., OM mantra, the moment we come to know about Pranavam the OMKARAM, it paves the way to know about all others like YOGAM(Yoga), GNANAM (Wisdom).
To acquire the divine wisdom of our sathguru sri pathanjali maharishi, we frequently look into this OM, being Om the basis for Yoga Sutras. We will be seeing about, when to attain wisdom of pranava that to in what state, how to handle & practice in each our subsequently posts in every type. This is our spiritual life’s eternal job.