Let us witness the 1H factor of OM in this edition

Here comes the explanation upon HOW is OM ! In General Om is written as a mixture Ah, Uoh, Ma (அ, உ, ம), however when expanded on pronunciation, it splits as Uoh, Ah & Mn (உ அ ம் = ஓம்). One can think it is a new info, yes we see & realise new forms of Om now & then. Upanishads tells letter Uoh (உ) as first one. Because which, we write as Uoh (உ) before we start to write anything.

The entire part of Mandukya Upanishad describes OM the pranava mantra, in which OM splits as Ah Uoh Ma & Anahata i.e., firstly Ah secondly Uoh thirdly Ma and finally Anahata. Anahata means a self sound or sounding by its own/self, a divine sound, god’s sound which is sounding at Anahata Chakra in 24/7 all 365days non stop.
This mind & brain tell us always about something, instructs us to act or do it, however our body doesn’t co-operate. Our body tells us to attain benefit from all our happiness/pleasure, at the same time it identifies us & make us witness the sorrow in happiness, if any. It makes us to perform or do things in various manners.

Om is the basis for all such actions of body. When there is a stomach ache, it passes the message to brain, immediately for the ache to get supressed, it searches & diagnose the reason whether it’s acidity, adequacy of digestion fluid or over consumption and makes the respective gland’s to act accordingly and supresses the ache without our knowledge.

Totally there is always a rapid chain of actions undertaken within our body. This can only be realised by human being but not for animals, for which in nature these aches are resolved by performing some actions that too is stimulated by its body & gets supressed by practice not by realisation or understanding. Only Human can understand everything, because of the orders received from brain, now and then, his will(சித்தம்-Sidha) always instructs him. Our will makes us to act accordingly as one way. Sins on that one way is accepted by this will and these accepted sins & its actions are stored in the mind as agenda for its remedy, to come of it. So there is no connection for brain in this.

We talk only upon will but not on brain. Whereas our science speaks only on our brain nowadays & make brain as most important one. Only the feeling/realising/sensing makes us our directions/actions, we need to correct our realisation alone, which only can renovate & trim our will. Some say brain as the companion for will, finally when you win and go up, your brain also gets benefited out of it. To say by what means it renovates itself, it helps the body to acquire power after the realisation of will (siddha) from it, for the one who practices. Yes, brains also have a second part/view like Moon.

A yogi not only realises this fact but also directs this and gets benefited.

Ah being the first letter of all languages, so called agaram அகரம்…ah comes from navel(நாபியில்-naabi) as tone(நாதம்-naatham), as a bio(உயிர்-uyir), we add musical notes (ஸ்வரங்கள்-Swarangal) to this tone. But Ah comes first, with our voice versatility with the basics we raise more sounds. From our navel without any codes tone is raised from bottom to top. When we open our throat, the tone comes as air sound, if we want to make a meaningful sound of such air, it can only be the Ah(அ) sound. This Ah sound spreads within the mouth and arrives at lips, when such arrives & unite lips, it gets converted as Uoh sound, so called Bio/lively((உயிர்-uyir) sound.

When pronouncing Ah(அ) continuously & accrual our lips(குவித்தல்-kuvithal, like a fish mouth) it sounds as Uoh(உ) and sounds as Mn(ம்) when mouth is closed. You can try this. When the lips are fully closed Mn(ம்) sounds.

Sound Ah(அ) is viewed as the creation, Uoh(உ) as protection and Mn(ம்) as Hiding(மறைப்பதை-getting settled) and shows the language of these three letters beginning, development & ending. It comprises a meaning that all languages, sounds stand to contain these three letters and its sounds. That is why, Om the pranava sound which is unity of these three letter is known to be base/seed (வித்தாக-viththaga) of all sounds. When OM is pronounced or said, when the sound of if finishes, the spiritual waves produced by that still exists. When we pronounce the word om in voice or thought by mind, it gives a benefit to us, its effect will act inside as sound of Anahata, the power sound.

OM, the Voice of God can be heard when we rest in complete silence. 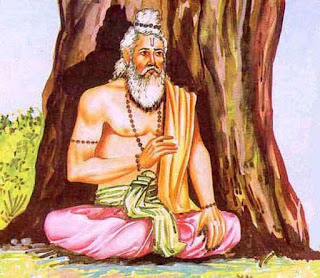 Rishi’s explained this OM sound as Ajapam அஜபம், for its inherent type of sounding alltime. Ajapam means, a sound getting heard without Japam ஜபம் (prayer, repeated pronouncing). This sound even gives us the light (within). Leaving all other sounds aside, by hearing only to this pranava sound within, one can realise the pleasure by practicing it. Siddhas tell this sound as the sound of heart, one who is practicing this continuously i.e., trying to hear the sound of Anahata, sound of power, Pranava sound Om within and succeeds, becomes speech & action less. There is no use in pronouncing a mantra without OM mantra, that is why all Vedas has Om as prefix to all its notes. When used, others words too acquire the same power what OM has in it.